I won the DCL canopy in a giveaway hosted by Team Apex. Originally I planned on using it to create a personalized drone for myself, in a retro cyberspace design.

However while I was waiting for the canopy to arrive, I learned that DCL was forbidding their atheletes to make political statements (by contract), in a discussion that was triggered by DCL's behavior around the Grandprix "in" China (Virtual).

Athletes showing solidarity or even championing social causes has a long history and not allowing for that is a political statement in itself, no matter if good intended or to appease dodgy sponsors or partners.

My first Idea was to have a blood stained DCL logo or maybe a chinese flag turning to blood on the canopy, or maybe go with a free Hong Kong theme. While building however I learned a bit about my own hypocrisy, while I'm ready to criticise others, I still end up purchasing part after part for my drones form China.

So the design changed again, into this blood stained, dirty drone, maybe saying a bit more about myself, than about those I set out to criticise originally. 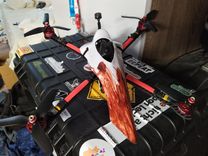