Last year youtube was full with the praise of famous racers for the analog version of this frame - and since I wanted to do a race-style build for a while I had to get one the moment I learned they had an HD Variant.

The frame itself is decent, and despite them adding a rasp to the packaging I didn't have to file anything off (I'm grateful for that, as I really don't want to deal with the nasty carbon dust.. they should at least include a warning about this). But all of the TPU parts where in their teal... which I found rather boring,

I wanted it to stand out, and I had the vision of a full-pink drone in my head for a while... infact I had bought the motors when I intended to do a pink build based on another frame, but that one had gone out of production before I could get one.

Long story short, I reprinted the parts I wanted to use in Pink, added a different back (I don't know why flyfive33 seems to think mounting antennas flat horizontal is a good idea..).. and here we go, isn't it a beauty? 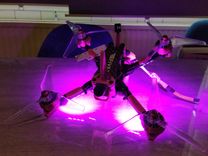 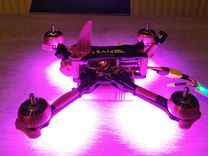